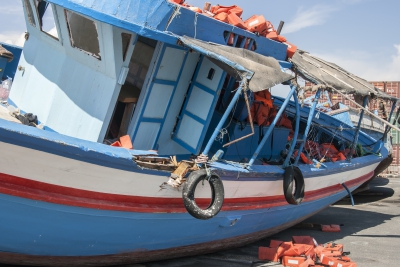 Sur-Place-Dialogue Italy – „Voices from the Border“:

You can access the full project report in German here.

„Our fingerprints are here, so this is our home“, asserted a refugee recognized in Italy, whom we met in a squat in Bari. The issue of fingerprints is emblematic of the European refugee policy. It was recurrent during the entire Sur-Place-Dialogue Italy, which represented the third phase of the project series “Fortress Europe?”. The project series traces the EU’s external borders, seeking a better understanding of the rules, theory and practice of European refugee policy.

After many months of research and preparation, a group of six students and young professionals embarked on a journey through southern Italy. From 2 to 12 September 2014, we travelled from Rome via Bari to the southern coast of Sicily, and finally to Lampedusa. An extensive programme with 25 different meetings helped the project group build a complex picture of European refugee policy: visits to nameless graves in Lampedusa and the port of the Sicilian town Pozzallo, where many refugee boats await shipbreaking, were just as important as discussions with various stakeholders, ranging from the German Embassy and the Italian Ministry of Interior in Rome to prefectures and self-organized refugees in makeshift shelters in Bari as well as the coast guard and Italian navy in Sicily and the Mayor of Lampedusa.

Our manifold impressions from the journey appeal to a wide range of topics and levels, which we also reflect on in a blog. A paradox that ran through the entire trip arises from the fact that according to applicable rules no entry to “Europe” exists: With few exceptions, the Dublin III Regulation stipulates that the country which has allowed or not prevented a person’s entry is in charge of the asylum seeker. This country of first entry is determined with the help of the registration of fingerprints in the European database EURODAC. 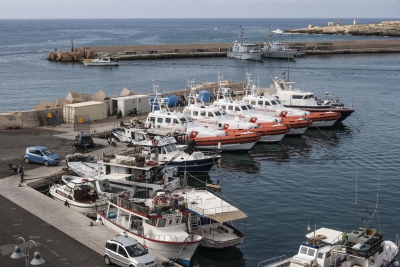 In the context of search and rescue operations, the consequences of these regulations were particularly clear: The Italian Coast Guard has always rescued people in distress on the Mediterranean. From October 18, 2013, the Coast Guard was supported intensively by the Italian navy through the now expired operation Mare Nostrum. This operation had been initiated in response to national and international pressure in the wake of the tragic shipwrecks off Lampedusa in October 2013. According to official figures, it rescued over 100,000 migrants and asylum seekers over the course of one year. At the same time, in view of the rising numbers of arrivals, an increasing number of critical voices throughout Europe expresses concerns as to Europe’s reception capacities.

In fact, the expensive operation of the Italian Navy seems to make the weaknesses of the common European refugee system and in particular the Dublin Regulation become evident: As the land borders of other EU countries have been sealed off, the access routes to the EU have moved to the Mediterranean because a foreclosure of the sea route is virtually impossible. To avoid bearing the cost for the majority of irregular immigrants and asylum seekers entering Europe alone – the majority of whom do not want to stay in Italy – Italy creates opportunities to bypass the Dublin Regulation by registering migrants’ fingerprints with a delay of several days, which enables them to continue their journey.

Thus, the impression of a lacking balance between solidarity and responsibility in the European refugee policy, which the project team had found in 2012 during the Sur-Place dialogue Greece, was perpetuated. While in Greece, however, a sense of powerlessness was tangible, in Italy, a sense of pragmatism prevailed, with which facts are created. Europe has to face these facts.

Continue reading: You can access the full project report in German here. 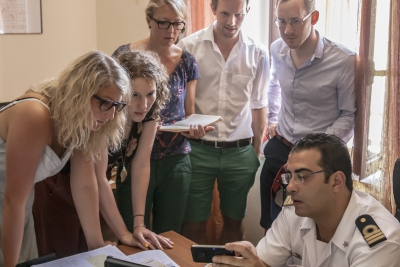 Detailed report on the Sur Place Dialogue in German with pictures

Hosted by the Oxford Monitor of Forced Migration (OxMo), reflecting on experiences and findings of the project

Under the theme “Voices from the border” the project “Sur-Place Dialogue Italy” explores the living conditions of migrants and asylum seekers at Europe’s external borders and places them in the context of European migration and refugee policy. Scheduled for September 2014, this is the third stage of the project series “Migration at Europe’s External Borders – Fortress Europe?” of the Student Forum within the Toenissteiner Kreis. In 2008, the first stage was carried out with a special focus on the border between Spain and Morocco. The second stage in 2012 dealt with the border between Greece and Turkey.

Refugee boats taking thousands of migrants to Italian shores every year have become the symbol of “Fortress Europe”. Italy has continually been in the focus of the media and was severely criticised for its approach to boat arrivals. In the past two years, public perception has shifted towards other countries where the number of arrivals has been increasing rapidly. Despite – or precisely because of – that fact, the situation in Italy requires undiminished attention. As with earlier projects, the team will explore to what extent the experiences of the people at the border reflect the policy of a “Fortress Europe”.

The project aims at raising awareness of the situation of migrants and asylum seekers across Europe by making “voices from the border” be heard. Asylum seekers and migrants, border police officials, locals, representatives from NGOs and other stakeholders will have the opportunity to express their views on the situation at the border in an unbiased way through the use of interviews, short films and photographs. These perspectives will be directly contrasted with that of Italian as well as European officials by use of a blog: The legal and political context will be analysed in kick-off meetings with representatives of various governmental as well as non governmental institutions in Brussels and Rome. In order to achieve a European perspective, the project will be conducted in cooperation with students from Italy.

The project focuses on three thematic aspects. Firstly, Italy will be examined as country of first entry for so-called “boat people”: What is the situation after the end of the push-back policy? What is the view of the inhabitants of Lampedusa and Sicily as well as the Italian border police on the current situation of boat arrivals? What role do the EU and the Dublin Regulation play in this context? The second focus is on Italy as a transit country for migrants and asylum seekers from Greece. On the example of Bari, it will be analysed to what extent the situation in the ports of Italy represents a reflection of the precarious situation in Greece. The third aspect that the project seeks to address are the living conditions of refugees in Italy, with a particular focus on asylum seekers who are returned under the Dublin Regulation. The reportedly miserable living conditions of asylum seekers and refugees will be examined and mirrored in discussions with those directly affected as “voices from the border”.

The project is led by a group of six German participants with an approximately equal number of Italian students. These are recruited via the international partner organizations of the Student Forum within the Tönissteiner Circle, the DAAD and the network of the College of Europe. In a German-Italian dialogue, the team will speak with the various stakeholders to examine the situation of refugees and migrants coming to Italy.

For more information on the project, we are available for inquiries under: fortress-europe-sf@googlegroups.com. We appreciate your interest, your ideas and suggestions!

This project outline provides detailed information on the project, its background and its ideas and aims.