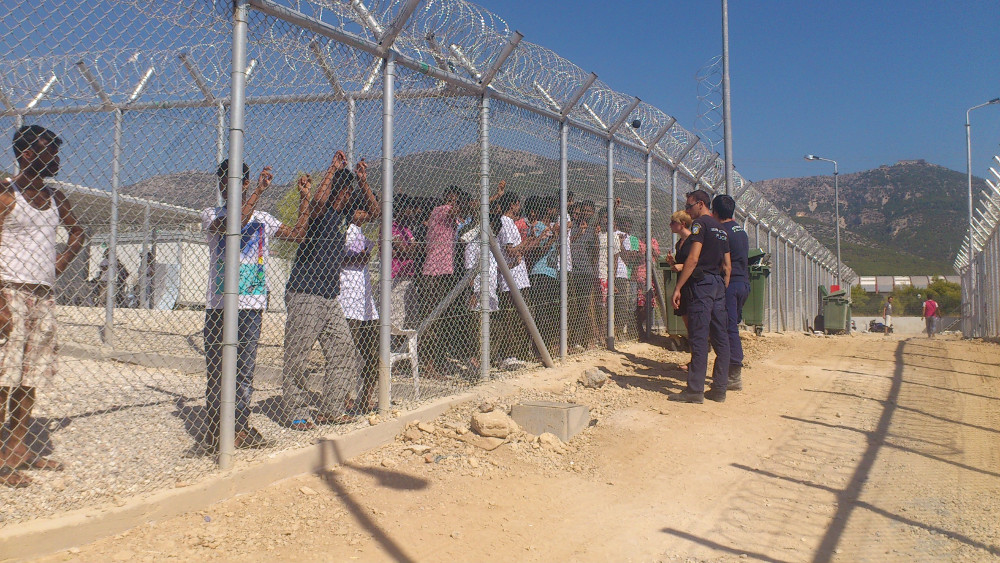 “Every night they pass through here, all wet and miserable”, says Maria. The old lady from Kastanies in a patterned dress is sitting on a lawn chair outside her house at dusk. It is a lonely place, on the outskirts of the village facing the no-man’s-land between Greece and Turkey. “They do not disturb us,” continues Dimitris, her grandson, sitting next to her. He has just finished high school and will soon leave the Evros region for univeristy, as well as most other young people from the border region. “They do us no harm, pass by peacefully. But in recent weeks we hardly see any refugees.” This is unsurprising: The entire area along the Evros River, which marks the border between Greece and Turkey, and has been the preferred entry for migrants to the EU in recent years, seems deserted. Neither in the village squares of the border towns of Nea Vissa and Orestiada nor on Omonia Square, the central gathering place for refugees in Athens, are there migrants or asylum seekers to be seen in early September 2012.

From 30 August to 8 September 2012, Klaas Eller, Lena Kampf, Julia Lemke, Nele Weßels and Janna Weßels travelled to Greece in the context of the the project “Fortress Europe – Migration at Europe’s External Borders, Sur Place dialogue Greece, Migration and Crisis” to consider the situation of refugees in Greece in the European context in exchange with Greek DAAD fellows and alumni. The sur-place dialogue started off with three kick-off days in Berlin, during which the project team met with Representatives of the Federal Foreign Office, of the UN High Commissioner for Refugees (UNHCR) and of the Protestant Church Service (Evangelischer Kirchendienst, EKD). This was followed by two days in Athens, one day in Patras and three days in the Evros border region with Turkey. During this time numerous discussions were held with representatives of various Greek authorities, including the Greek Asylum Service, police officers and mayors, as well as discussions with staff of NGOs, with Greek students, but also with passers-by, with detainees and staff of detention centers, as well as migrants and asylum seekers themselves. In the course of these ten days the intensive discussion drew – piece by piece – a complex picture of the refugee and migration issues, characterized by numerous antagonisms and dilemmas.

Especially in the context of the crisis, the country is completely overwhelmed with the large number of migrants and refugees. There is no functioning asylum system and no work or other assistance for migrants who therefore often have to live in the street. In the center of all discussions was the current operation “Xenios Zeus”. For this operation, several thousand police officers were mobilized at the beginning of August from one day to the other to rigorously seal off the borders and remove the migrants and refugees from the city. They were rounded up and moved to “maybe somewhat quickly made” detention centres, as Babis Pantelidis, President of the border police union, explained to us in the Evros region. “Xenios Zeus”, named after the “god of hospitality,” was an ad hoc operation of the Ministry of Public Order and Civil Protection. During the Sur-Place Dialogue it became clear that the operation can be regarded as an expression of the lack of balance between solidarity and responsibility in the European immigration and refugee policy. A feeling of powerlessness is reflected in the various actors at all levels: The border police feel alone with the ungrateful task of monitoring the borders, the people in the Evros region feel abandoned by the Greek government, Greece feels left alone of the EU. Thus, for example, Mr. Evangelos, Vice-Mayor of Orestiada, a town on the border river Evros wonders: “I cannot understand how a country can act as the drain of Europe”. And the Greek student Eleni says: “For me, it s a European issue and not a Greek one. It has to be tackled from all of us and not from individual countries at the borders.”

A detailed project report in German with photos entitled “Trapped in the Land of Crisis: Migrants and the God of Hospitality”

An article in English by Nele and Janna Weßels titled “Trapped in Greece – A Report about Experiences of Migrants, Asylum Seekers and Border Policemen during the Early Weeks of the operation Xenios Zeus”, published in the journal Oxford Monitor of Forced Migration.

There was a short TV report on the sur-place dialogue by the Greek broadcaster ThrakiNet, featuring an interview with the project manager Janna Wessels.

Two local newspapers in the Evros region (889-News / Elthraki) also reported about the project in Greek.

The weekly magazine Stern No. 43 of 17.10.2013, published an article under the title “This fence divides the world” to which team member Lena Kampf contributed impressions from the project.